2012, A Ground-breaking Year for the Kuala Lumpur Convention Centre

The year 2012 saw the Kuala Lumpur Convention Centre (the Centre) host 1,442 events; the highest number recorded since opening in mid-2005, a 7 per cent increase from the 1,346 held the previous year, and served over 1.6 million delegates and visitors. In turn, this resulted in an economic impact contribution RM590 million. 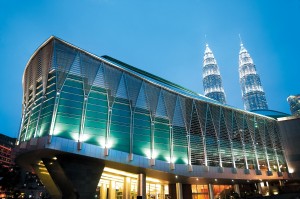 This brings the total number of events held at the Centre between June 2005 and 31 December 2012 to 6,645, with over 13.7 million delegates and visitors in attendance and the total economic impact contribution to Kuala Lumpur and Malaysia for the period to RM4.2 billion.

For the Centre, the past 12 months saw the launch of a revamped mobile friendly website, Wi-Fi network enhancement, a student training partnership with Taylor’s University and continuing Corporate Social Responsibility (CSR) work with several environmental and children’s organisations. The facility also garnered kudos from its peers with receipt of several prestigious awards including the MICE Report Awards 2012 for ‘Best Convention Centre in Asia’, Gold Award at the Meetings Industry Marketing Awards 2012 for ‘Best Print Advertising Campaign’ for the Batik Sarong Tie-Up Campaign and the Chaîne des Rôtisseurs Malaysia Chapter’s inaugural ‘Dato Lau Foo Sun Excellence in Dining Award’, amongst others.

Not resting on its laurels for the record-breaking performance in 2012, General Manager Datuk Peter Brokenshire said the Centre is all ready to kick-off the New Year with an array of innovative product offerings to remain flexible and accommodative to meet the evolving needs of our local, regional and international clientele.

“As we mark our eighth year of operations, we have put a lot of thought into what we can do better to continue attracting new clients whilst retaining old ones. With all business segments meeting their targets in 2012, our plan going forward is to aim for better yield management, use of space and quality of events.

On the Centre’s calendar of events for 2013, Datuk Brokenshire said the venue will have hosted and welcomed over 20,000 delegates by July through several prestigious events including the 35th Asia Pacific Dental Congress (APDC 2013), 7th IAS Conference on HIV Pathogenesis, Treatment and Prevention (IAS 2013) and Women Deliver Conference 2013. In the latter half (of 2013) will be events such as the International Fire Security Exhibition & Conference Asia 2013 (IFSEC Asia), Cybersec Asia 2013, Glasstech Asia 2013 and the first International College of Neuropsychopharmacology (CINP) Special Congress on Addiction and Mental Health 2013.