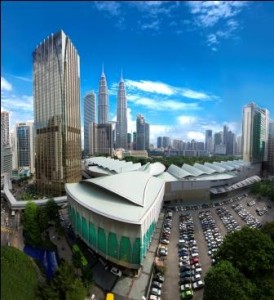 The Kuala Lumpur Convention Centre (the Centre), Malaysia’s premier convention facility, expects high profile events secured from the North American market to bring in 12,500 delegates and generate an estimated economic impact of RM186 million (USD58 million) to Kuala Lumpur city and Malaysia next year, having garnered a reputation for flexible and innovative solutions for various events held at the award-winning property.

Director of Sales and Marketing, Kuala Lumpur Convention Centre, Angeline Lue said the Centre is seeing increasing awareness of Malaysia as a growing business events hub in the Asia Pacific region, thanks to its aggressive engagement and marketing campaigns since it started reaching out to the North American meetings market two years ago through initiatives such as participation at international trade shows, in particular IMEX America.

This is evidenced by Malaysia’s success in securing the Toastmasters International 82nd Annual International Convention to be held from 20 to 23 August 2014 at the Centre and which will mark the first time this prestigious event will be held outside North America.

“We’re especially excited about Toastmasters International 2014 as this will be the first time in its 88-year history the world leader in communication and leadership development is going off-shore for its annual international convention. By giving Malaysia and the Centre this honour reflects confidence in both the country’s meetings industry and the Centre’s capability.” said Lue.

Toastmasters International is expected to bring together 2,000 delegates and generate RM32.5 million (USD10 million) in economic impact to the country.

Lue added the Centre was looking forward to welcoming more US-based meetings in the new year (2014), including the Million Dollar Round Table (MDRT) Experience 2014.

The latter saw some 3,000 delegates share time and space with established and aspiring entrepreneurs, thought leaders and researchers from all over the world on the subject of empowering entrepreneurs with the skills and resources necessary to compete and thrive in the 21st century.

With more than 3,500 delegates from over 149 countries in attendance, Women Deliver 2013 was one of the largest gatherings of policymakers, advocates and researchers to focus exclusively on women’s health and empowerment to date. In thanking the Centre for a successful event, Jill Sheffield, President of Women Deliver, attributed the wonderful outcomes achieved at the conference to having the perfect venue for the meeting.

The Centre’s commitment to elevating the delegate experience has stood her in good stead with clients and delegates alike. In delivering world-class products and services, the Centre reaches out to foreign guests with a unique complimentary Cultural Showcase of eight Malaysian arts and crafts comprising batik painting, basket weaving, wood carving, songket weaving, pewter smithing, henna painting and Chinese calligraphy presented to the sounds of the gamelan (traditional Malay orchestra) to give international delegates a snapshot of the country’s rich and diverse cultural heritage.

The Cultural Showcase is offered under the Conventions Value-Add Programme worth RM100,000 (USD31,000) designed specifically for event planners of international association meetings and includes site inspections, pre-function meetings, a cocktail reception or media conference fully hosted by the Centre, and 10 complimentary tickets to the PETRONAS Twin Towers’ Sky Bridge for a truly ‘birds’ eye’ view of the iconic Kuala Lumpur City Centre and its surrounds.

Since opening its doors in 2005, the Centre has been the venue of choice for more than 7,700 events, welcoming 15 million delegates and generating an estimated RM4.70 billion (USD1.48 billion) in economic impact.