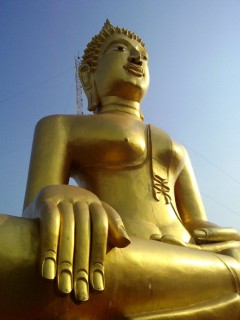 Popularly known as Krung Thep, Bangkok is the capital of Thailand. Being the melting pot of different cultures, races and religions for centuries, Bangkok is as intoxicating in its diversity as it is timeless. Rich with cultural traditions dating back to 1700s, this modern metropolis now has a population of over eleven million.

The small trading centre that began as a port community on the bank of the river Chao Phraya 200 years ago is one of Asia’s most prosperous cities today. Enviable infrastructure, easy accessibility, integrated services and state-of-the-art facilities also make it a perfect MICE destination. The city is a haven for shoppers, a delight for foodies and a respite for corporate honchos. To sum it up, Bangkok serves as a perfect concoction of modern day life and ancient rich culture.

Time: Thailand is seven hours ahead of Greenwich Mean Time.

Best time to visit: October to March when the temperature is low and comfortable.

Drugs: Those in possession of illicit drugs face one to ten years’ jail and fines. Punishment for drug dealing or trafficking is severe.

Smoking: Smoking is prohibited in all air-conditioned buildings and public places.

The Grand Palace is the residence of former Thai kings. It houses the Royal Chapel, the Royal Collection of Weapons, the Coin Pavilion and a museum of artifacts from the Grand Palace. This famous centre of Thai Art is a landmark of the city as well. 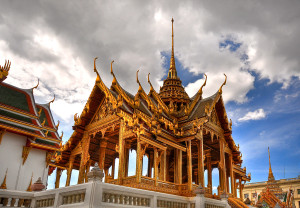 Bangkok canals also form part of the tourist attractions. These are really famous and are the reason behind the naming of the city as the Venice of the East. Canals also serve as one of the major modes of transportation enabling easy transportation between different parts of the city. From the Chao Phraya River the canals are surrounded by traditional Thai houses, old temples, royal barge museum etc., all of which make up for an interesting and refreshing sight. 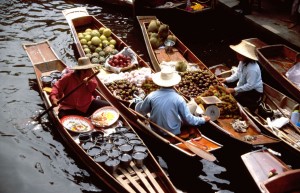 The floating markets of Bangkok are known for their exemplary Thai charm. Merchants paddle along the canals in their canoes with fresh fruits and vegetables selling them to the shoppers on the banks. The markets are typically vibrant and colourful. The most famous of the floating markets is the Damnoen Saduak, which is about 100 kilometres southwest of the city.

Thai cuisine has always been a favourite of many food enthusiasts. Striking Thai delicacies often become a reason for a trip to Bangkok. Thai food is a little spicy, distinct and can be a totally different experience in terms of taste. Thai food is characterized by balance and strong flavours, especially of lemon grass and fresh coriander.

Bangkok is not only the commercial and the cultural centre of Thailand but is also one of the most visited cities in Asia. The city offers a wide range of entertainment options, visual delights and a myriad of activities. This ancient city of Buddhism, lively floating markets and mouth-watering cuisine can be both overwhelming and intriguing to anyone visiting for the city for the first time. Nevertheless, take a tour of the capital city of Thailand in a local ‘tuk-tuk’ or in a bright candy coloured cab and savour the best of both worlds.