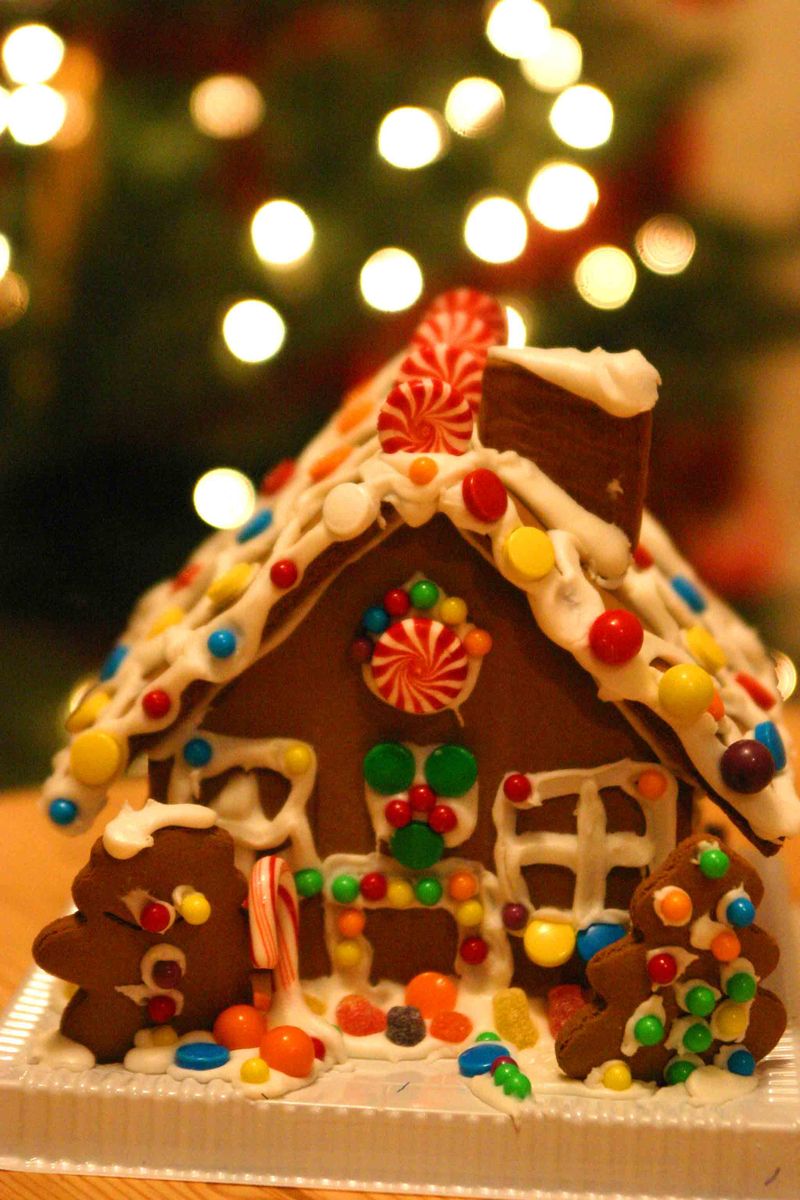 The most loved delicacies that signify Christmas

Scrumptious delicacies are the essence of celebrations across the world. Irrespective of whether the celebration is a small or a grand one, food plays an integral part in it. These tempting foods are what we all look forward to as the celebration approaches. Some preparations are specific to some festivals and this is what creates beautiful childhood memories of celebrating these festivals with loved ones. For instance, the aroma of a freshly baked Turkey right out of the oven will often make an American think of Thanksgiving. A Birthday would always be considered incomplete without a cake! Talking of festivals, coming right around the corner is the magical festival of fairy lights, Carols, stockings, gifts and everyone’s favourite Santa Claus! Yes…it’s Christmas time!

Every family has its own traditions that it follows to celebrate Christmas. Some people like to replicate the Christmas of their childhood by following traditions that have been handed down and sometimes some new traditions are invented to keep up with changing times and lifestyle of the family. However one thing that has remained a constant is the food. Even today, the traditional Christmas dinner consisting of warm fresh baked fruit cake, cookies, gingerbread, roasted turkey/ham, minced pie, etc. is a major part of Christmas celebrations.

Over the time, many new dishes have been added to the classic Christmas dinner menu. But there are some which have remained all-time favourites! So here’s presenting you the five “must have” Christmas delicacies and their recipes.

There are many stories related to the invention of the shepherd’s crook-shaped Candy Cane, which was also believed by some to denote the letter “J” for Jesus.

One of the folklore about Candy Cane says that it was first invented by a German choirmaster to entice his little singers to be quiet during services. He is believed to have created the candy canes with just sugar and water. Over the years, people have mastered the art of making the Candy Canes that we find today with a mixture of sugar, attractive colours and varied flavours like peppermint, winter greens etc. 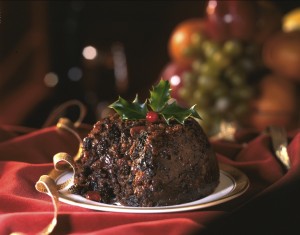 The first recipe for this pudding came out in the Middle Ages when it was called “Mince Pie” due to its main ingredients being chopped poultry, pheasant, partridge and rabbit. Around the 14th century, it was known as “Frumenty” and was made of beef and mutton with raisins, currants, prunes, spices and wines. By around the 15th century, it slowly evolved into Plum Pudding by being thickened with breadcrumbs, egg, dried fruits. More flavours like beer and spirits got added till the 17th century when the pudding finally came to look and taste as it does today.

With time, many superstitions have surrounded Christmas Puddings. One of them say that the pudding must be made using 13 ingredients representing Jesus and His Disciples and every family member should stir the pudding with a wooden spoon from east to west, in honour of the Wise Men!

The Christmas pudding is traditionally made 5 weeks before Christmas, on or after the Sunday before Advent. That day is also called “Stir-up Sunday”, as each family member gives the pudding a stir and makes a wish. Many families stir silver coins for wealth, tiny wishbones for good luck, silver thimble for thrift or an anchor for safe harbour into the pudding mixture. The lovely aromas which float through the house as the pudding steams are the start of the festivities! 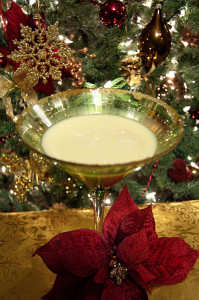 George Washington and Eggnog? Yes! One of America’s greatest leaders and an unparalleled General also happens to be the master of curing eggs and cream with rye whisky to make Eggnog! George Washington is said to have served this preparation to his guests at his home at Mount Vernon during this time of the year.

It is believed that the tradition of eggnog first began in the 17th century in Europe. It was then served to only the well-to-do of the society. In recent years though, the rum added version of eggnog became a more economical option, making Eggnog popular among all classes. This spicy and rich alcoholic drink became a holiday favourite. Each region prepared it according to its personal taste, including the famous George Washington Eggnog version, although the basic recipe remained the same (eggs beaten with sugar, milk, cream and some kind of spirit). This icy Christmas time treat needs to be made at least five days ahead of time so that the egg gets cured well by the alcohol. Making the perfect Eggnog is all about curing and tempering separated eggs and milk in a specific order. 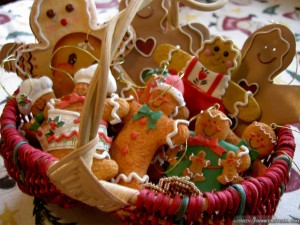 The mention of Ginger Bread instantly takes us back to our childhood fairy-tale Hansel and Gretel! How can we forget the thrill we felt when Hansel and Gretel while lost in the dark woods, suddenly spot a beautiful house, which has walls made of gingerbread! But that is in the 19th century and our very own gingerbread dates back to lot longer than that. It is believed that the ancient Greeks and Egyptians used it for ceremonial purposes. A European crusader in the 11th century is said to have brought back a new spice “ginger” from the Middle East and as ginger and other spices became more affordable, ginger bread was born!

The earlier European recipe consisted of stale breadcrumbs, ground almonds, sugar, rosewater and ginger. The paste mixed with these was pressed into wooden moulds to bear the likeness of kings, queens, emperors or religious symbols and used to tell a tale. The finished cookie was painted either with flat white icing or with edible gold paint by those who could afford it.

Around the 16th century, flour replaced the breadcrumbs and eggs and sweeteners were added to make lighter ginger bread. Queen Elizabeth I is given credit for the first Ginger Bread Man. She is said to have presented the visiting dignitaries with ginger breads baked in their own likeness!

Gingerbread tied with ribbons became very popular at fairs and festivals. They became a token of love when exchanged! 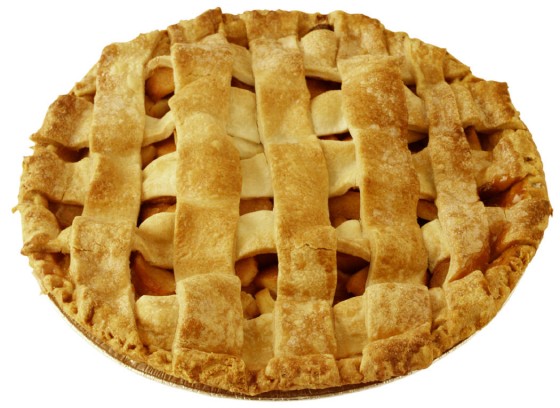 “Of all the delicates which Britons try
To please the palate of delight the eye,
Of all the sev’ral kings of sumptuous far,
There is none that can with apple pie compare.”

William King, an English poet dedicated this poem to the Apple Pie in the 16th century. This is but one of the many poems, quotes and sayings that were inspired by the crunchy topped and lusciously soft apple filled pie. Its popularity in America can be gauged by the saying “As American as Apple Pie,” which is used to describe a true blue American! Robert Green, English dramatist and poet wrote “Thy breath is like the steame of apple-pyes”, as an ultimate compliment, praising a lovely lady.

Amongst the many interesting stories about the origin of Apple Pie, one story narrates how it became America’s favourite. Professor Charles Watson Townsend used to dine regularly at the Cambridge Hotel in Washington County, New York and used to often order his apple pie with ice cream. Once a person sitting beside him asked him what the dish was called and as it did not have any particular name, the Professor promptly made up the name, “Pie a la Mode.”  He liked the name so much that he would always order it by that name.

One day when he visited the famous Delmonico’s Restaurant in New York City, he ordered a Pie a la Mode. Obviously the waiter said he had never heard of any dish by that name. The professor got furious  and is quoted to have said, “Do you mean to tell me that so famous an eating place as Delmonico’s has never heard of Pie a la Mode, when the Hotel Cambridge, up in the village of Cambridge, NY serves it every day? Call the manager at once, I demand as good serve here as I get in Cambridge.” From the very next day it became a regular at Delmonico’s and a reporter who was listening to the whole conversation wrote this story in the New York Sun, making this dish a nation’s favourite after all the publicity.

Apple Pie dates back to the 14th century although the recipe was a bit different then. It did not contain any sugar and the yummy pastry crust of the pie was not eaten and was only used as a case to hold the filling. Around the 16th century, when sugar was more readily available, the crust was declared to be edible. And hence our favourite Apple Pie was born. This delectable pie with its flaky crust and scrumptious filling is a must-have for Christmas.

So what are you waiting for? Put up the holly, gather around the crackling fire and revel in the warmth and cheer of Christmas with delicious Christmas aromas, adding the final zing to the festivities! Merry Christmas!