GIBTM 2013 (www.gibtm.com) to close today on a high note, having attracted a record number of buyers from the corporate meetings sector, as the booming Gulf economies attract corporate travellers, trade delegations and other business groups. 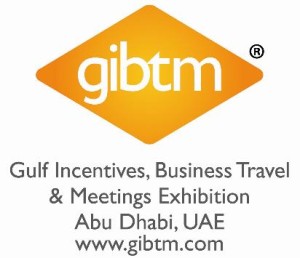 The seventh edition of the show, which kicked off at Abu Dhabi National Exhibition Centre (ADNEC) on Monday (March 25) tripled corporate meetings buyer attendance, accounting for 35 per cent of all hosted buyers attending the show, compared to 11 per cent from the corporate sector in 2012. The total number of Hosted Buyers was evenly split between the Middle East, Europe and Asia Pacific, with first-timers attending from key growth markets for the Middle East including Australia, South Africa and AAzerbaijan.

“As a consequence the region is clearly attracting an increasing number of meetings, incentives and business travellers, especially from key regional and international trading partners. We have also witnessed a sharp increase in the number of overseas destinations, looking to attract meetings and incentive groups from the Middle East,” added Hall.

In addition to the hike in corporate meetings buyers at the show, the number of decision-makers from the potentially-lucrative international associations sector attending GIBTM more than trebled in size.

First-time buyer at GIBTM, Ather Ali, Manager – UAE, Pathfinders Universal Travel & Tourism LLC echoed Hall’s sentiments: “We are expanding into the meetings industry and the show has provided us with the perfect platform to understand how this sector works. We have had a lot of promising meetings with suppliers which we are certain will develop into valuable new business,” he said.

Another newcomer, Ahmad Tareq El-Maraghy, hotels contracting specialist for American Express Travel Services Egypt added: “I have received many requests for group bookings in Abu Dhabi, Bahrain and Doha recently so I came to GIBTM to get good contacts. It will now be very easy for me to book business here.”

With all eyes on China as a huge growth market for meetings business for the Middle East, GIBTM brought in a delegation of 10 influential buyers to the show including first-time visitor to the UAE, Jeffery Huang, vice secretary-general and associate researcher at the World Federation of Chinese Medicine Services. “This is a very good platform for us to find partners in potential conference destinations,” he said. “I will now consider the Middle East for our world congress in 2017. This typically involves a two-day conference and three to five days of leisure for our delegates so I am looking at combining a few destinations, including the UAE, Oman and Qatar.”

Exhibitors including hotel operator Rotana, Qatar Tourism Authority and Cyprus Tourism Organisation (CTO) said they were impressed with the quality of the buyers at this year’s show because they covered key source markets and sectors. “We have met with many new first-time buyers who are very interested in Cyprus as a short-haul meetings destination and it’s great to see more corporate and regional buyers involved in GIBTM,” said Vassilis Theocharides, regional director Middle East & Arabian Gulf Office, CTO.

Vicky Varfis, corporate vice president sales and revenue, Rotana, which is targeting 25% growth in meetings business across its portfolio of properties in 2013, said: “We have had a good number of appointments with top quality regional and global buyers at this show and we are confident that similar to last year, these appointments and leads will materialise into solid bookings.”

In a bid to ramp up interest in Qatar, which has identified business travel and meetings as a key facet of its tourism strategy going forward, Qatar Tourism Authority’s (QTA) director of tourism development Abdulla Al Bader said it was imperative the destination brought its partners to GIBTM ‘to showcase the quality of MICE product in Qatar’.

“With 110 hotels and hotel apartments currently under construction and the opening of the Doha Convention Centre next year, we are clearly focused on developing world-class infrastructure to support the business tourism sector,” Al Bader said.