The Swiss Pass Gets a New Name

New Introductions for Swiss Travel in 2015

The popular all-in-one ticket called the Swiss Pass will be marketed as the Swiss Travel Pass from Jan 1, 2015. However, the scope of services remains unchanged ranging from unlimited travel by rail, road and waterway, and a 50 per cent discount off most mountain railways, and free admission to more than 480 museums nationwide.

The Swiss Travel System Ltd. launches the Grand Train Tour of Switzerland in 2015. The panoramic rail routes of Switzerland never fail to fascinate vacation visitors. From the Alpine resort of St. Moritz in the east to palm-lined Lake Geneva in the west, from busy bustling Zurich to Mediterranean-like Lugano, so many scenic splendours are on offer. The sights range from glistening glaciers, mountain lakes and snow-capped summits to traditional villages and towering viaducts. From January 1, 2015, visitors can enjoy all these attractions with just a single all-in-one ticket on the Grand Train Tour of Switzerland. 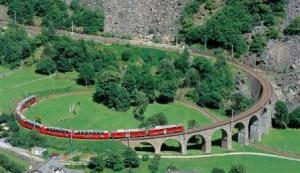 The Grand Train Tour of Switzerland combines the most beautiful panoramic rail routes in one unique travel experience. The tour covers some 1200 captivating kilometres, highlighting the best of the nation’s public transport system. It can be booked at any time throughout the year and requires just one ticket – the Swiss Travel Pass.

The most attractive rail routes

The Grand Train Tour of Switzerland covers eight different routes throughout the country. It can be started from any point and there is no prescribed travel direction. But Zurich, Switzerland’s largest city and most multicultural metropolis, is certain to be one of the most popular departure and destination points. From Lake Zurich the tour first leads to St. Gallen, followed by the Pre-Alpine Express to Lucerne and then on the GoldenPass Line to Interlaken and Montreux. From Lake Geneva, it continues to Martigny, Brig and Zermatt, where the Glacier Express takes travellers on to Chur and the fashionable Alpine resort of St. Moritz. From here, two routes lead to Lugano – in summer aboard the Bernina Express and Bernina Express Bus; and in winter with the Palm Express (PostBus). The Grand Train Tour of Switzerland concludes with the Wilhelm Tell Express to Lucerne, and finally back to Zurich. Every section of the tour promises memorable moments and scenic highlights.