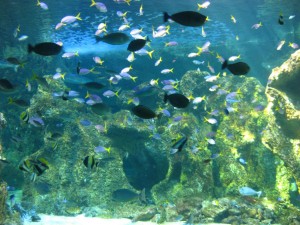 SEA LIFE Sydney Aquarium celebrates its status as one of the world’s largest aquariums and the largest of the world’s 44 SEA LIFE centres with over 70 exhibits of 700 different species and 13,000 animals in an impressive eight million litres of water. The Aquarium is home to the world’s largest variety of sharks and rays, as well as Australia’s most famed marine animals, including the iconic platypus, Little Penguins and the dugongs – back on display.

Now the SEA LIFE Sydney Aquarium will lead visitors on a journey of amazing discovery through 14 newly-themed areas, including a new Tropical Bay of Rays, an interactive touch pool, mangroves, shipwreck area and new Shark Walk where visitors can face their fear as they walk over some of the world’s biggest sharks, including Lemon Sharks, Grey Nurse Sharks and various species of reef shark.

Visitors would also be able to descend deep under the sea and explore the depths of Shark Valley – home to a giant whale skeleton and the tumbled-down ruins of an ancient stone temple.